Red Mago has been specializing in corporate teambuilding events and custom-tailored activities for 15 years. We can arrange elite, unique and entertaining experiences for your group so they can have the most rewarding time possible. For a few ideas of what we offer, click the tabs below and discover the wonders of Madrid! We’ll include the transport and guides you need to run everything as smoothly as possible.

Our premiere excursion in Madrid, immerse yourself in history as you explore the city’s most important sites. We present the best of the city’s architectural history: its evolution from “Moorish Madrid” through to the Habsburg and Bourbon periods, visiting the Plaza Mayor and Puerto del Sol and the Spanish Royal Palace (Palacio Real) where you’ll see the royal collections and admire its Baroque details. Finish your day at Madrid Rio, the city’s newest public park.

Your excursion starts at 9am in central Madrid, beginning your exploration of the history and architectural styles of this dynamic urban area. Our knowledgeable English-speaking guide will lead you 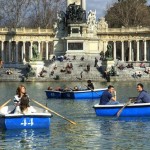 through the Barrio de la Moreria, the old Arabic section of the city. From there we view some of the various edificios of Madrid’s Habsburg period, including Calle Mayor, Plaza Mayor, Plaza de la Villa and the world-famous Prado Museum.
Your visit continues with a look at the reign of Charles III in the 18th century when Madrid was known as an important centre for culture and science. We explore the Monumento de la Encarnación, Puerta del Sol and Puerta de la Opera, which reflect the artistic energy of that time. Contemporary Madrid is then unveiled by exploring the boulevards of Gran Vía and Paseo de la Castellana. as well as visiting the charming Barrio Salamanca and Parque del Oeste. Along the way we also stop at modern architectural sites like the Ventas Bullring and the famed Santiago Bernabeu Stadium, and stroll the city’s newest park, Madrid Rio.

Then we visit the Royal Palace (Palacio Real), former home of the Spanish royal family, which was constructed in Italian baroque 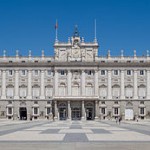 style in the 18th century within sight of the city’s historic Alcazar (Arab-fortress). Take a tour inside one of the the best-preserved palaces in Europe and admire the extensive collection of antique clocks, armor, art, porcelain and tapestries that line its halls. Make sure to check out the works by Spanish masters Goya and Velazquez and stop by the throne room, banquet halls and private royal apartments. You’ll also have time to see the royal armory, pharmacy and grand hall of columns.

Contact one of our representatives and let Red Mago arrange this world-class excursion for your group.

Only 70 kilometers from Madrid, Toledo is one of the premiere tour destinations in all of Spain. Formerly the capital of the Spanish Empire, the entire historic centre has been declared a 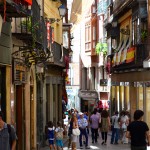 UNESCO World Heritage site which combines Islamic and Christian Gothic architecture. Visiting Toledo is a trip back in time, a photogenic maze of cobblestone streets and breathtaking views waiting to be discovered. Take a private tour of Toledo and explore this unique city where Christians Jews and Muslims co-existed for hundreds of years.

Toledo is a treasure-trove of art and culture. Your group will visit the Museo del Greco, housing the finest collection of works by the famed painter, sculptor and architect of the Spanish Renaissance. Wander the back lanes and you’ll swear you can still hear the clang of hammers on anvils forging steel blades like in the 17th century when Toledo’s sword production was famous throughout Europe. In lovely Zocodover Square, packed with open-air cafes, you can rest your feet, and later visit the Alcazar, an enormous Moorish fortress towering above the rooftops with incredible views of the Catedral de Toledo and the surrounding countryside.

Your visit to Toledo includes our knowledgeable English-speaking guide and return private coach hire directly from your hotel in Madrid. Contact one of our representatives and let Red Mago arrange for your group a world-class cultural excursion.

World-renowned El Prado, Spain’s National Art Museum, can be overwhelming in its size, containing a vast selection of masterworks on permanent display. Our 1.5 hour tour with our knowledgeable English-speaking guide takes your group directly to the best exhibitions while skipping the line with a priority- 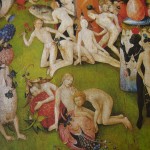 access ticket. Learn about some of the museum’s most famous works, including Bosch’s Garden of Earthly Delights, El Greco’s Annunciation, Velazquez’s Las Meninas, Goya’s Family of Carlos IV and extensive works by Peter Paul Rubens.
Founded in 1819, El Prado started out as the idea of King Charles III and the original Neo-Classical building soon outgrew itself, so two further annexes were added to hold the ever-growing collection of art.
Explore the works in chronological order, starting with an exhibition of Dutch Masters, through rooms devoted to Greco, the celebrated Spanish Renaissance painter, sculptor and architect. Afterwards see the works of the Diego Velazquez, master of the Baroque and finish the tour with the works of Francisco Goya, considered the most important Spanish artist of late 18th and early 19th centuries.

Housed in an elegant old hospital building, Madrid’s Reina Sofía Museum is the ideal place for your group to discover many of Spain’s finest artists and sculptors. Begin your discovery of 20th-century Spanish art, from abstractionism to cubism, surrealism to modernism as your private guide illuminates the revolutionary and fascinating works on display.
Be inspired by artists like Picasso, Joan Miró and Dalí and see Madrid’s most impressive collection of modern art. This 1.5-hour tour includes a priority-access ticket so you can dodge the queues and make the most of your time. Learn about Spain’s most important 20th-century artists, discover local artists and see Picasso’s masterpiece Guernica.

Let Red Mago arrange a private tour of these exceptional museums. Contact one of our representatives to book a tour suited your schedule.

Let the fascinating history of Spain and the legendary culture of Ávila and Segovia sweep you away on this day trip from Madrid which takes your group to a pair of spectacular UNESCO World Heritage sites. Explore the 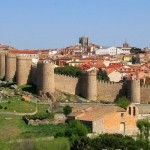 walled city of Ávila, one of the best-preserved walled cities in the world and then visit the ancient city of Segovia to see Spain’s finest Roman aqueduct and its impressive Gothic cathedral.
Your day trip from Madrid to Avila begins with a stop at the hill of Los Cuatro Postes to admire the magnificent panoramic view of the walled city. Then visit the Basilica of San Vicente, a masterpiece of Gothic architecture and home to the most precious Romanesque sculptures in Spain before touring the Cathedral of Avila, with its ornate chapels and alabaster tombs.

In the afternoon your guided tour takes you to Segovia to visit the Roman aqueduct, over 2000 years old, before moving to the famous Alcázar, a beautiful medieval Islamic fortress from the eleventh century.
Step back in time and imagine the medieval tournaments that once took place here in the court of the Castillian Kings who ruled from here. Complete your tour of Segovia with a visit to its impressive cathedral, the last Gothic cathedral built in Spain and renowned as ‘The Lady of the Cathedrals’. On this day trip your group has an option to include a Iberian-style beef lunch or a gastronomic meal of Segovian local specialties.

Let Red Mago arrange a world-class day excursion your group will remember. Contact one of our representatives to book a tour suited your schedule.